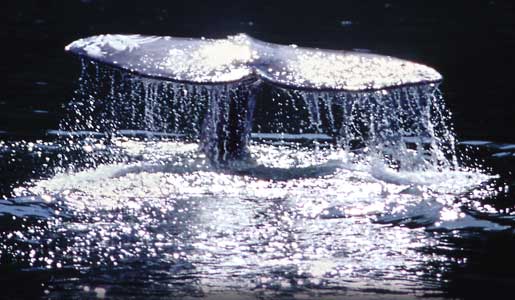 Depending on the species of whale, weather and sea conditions, and whale activity (feeding, travelling, resting) we could see anything from a blow off in the distance to fluking, spy hopping or breaching. Most often we see the blow, then part of the whale's back, then the tail flukes if it does a deeper dive. 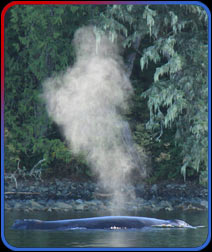 Warm, moist whale breath condensed in the cool air and combined with water from around the blowhole to form a spray rising three or four metres into the air. The size and shape of the blow can tell an experienced guide what type of whale is being spotted. Photo by Brian Congdon 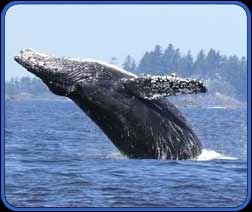 The whale launches itself clear out of the water. More common in humpback whales, but less common for the gray whale. Photo by Brian Congdon 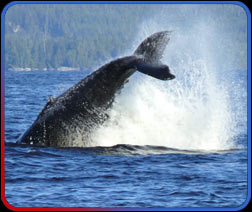 The whale repeatedly slaps the water with its tail, which will often call more whales to a feeding site. 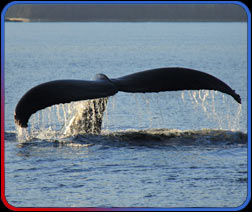 When a whale wishes to dive it lifts its tail into the air in a movement called fluking. 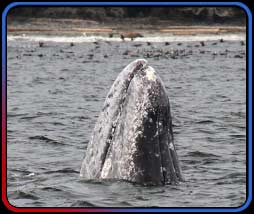 Whales will lift their heads out of the water to get a good look at something. This curiosity can be directed at whale watchers in a special encounter as seen here. Boats do not approach whales this closely, this whale approached the boat on its own. Photo by Brian Congdon 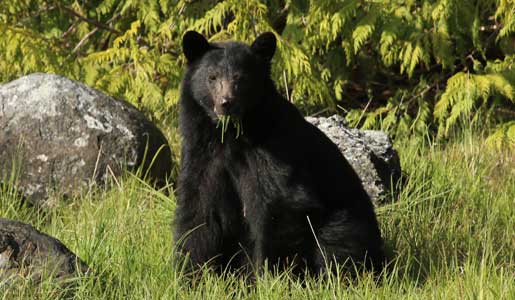 Bears emerge from hybernation in the late spring. Bear watching is best along the shorelines where they like to search for food, so low or moderate tides are a good time to see bears from a boat. 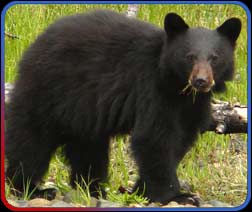 Cubs are often seen sticking very close to their mother because male bears can harm cubs. 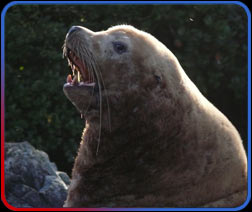 Sealions in the Ucluelet Harbour are a noisy entertainment, especially in the winter months when weather conditions are rough.

Islands in Barkley Sound are also popular gathering places for a large number of these curious and active animals. 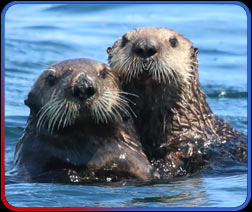 The Sea Otter is the smallest marine mammal. With no fat, like other marine mammals have to keep warm, they rely on their very fine, dense fur; about 100,000 hairs per square centimeter. Hunted to near extinction and now protected, it has made a remarkable comeback. Thirty years ago, we might see one occasionally. Now, sighting a Sea Otter is much more likely on most of our trips that leave the harbour. 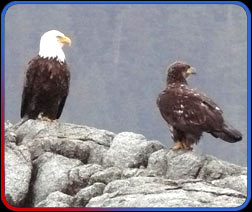 These magnificent birds are a common sight most of the year. "Our" eagles eat mostly fish so they are often seen on the rocks or trees near the water. This photo shows an adult with an immature eagle. Young do not get white feathers until their fourth or fifth year. 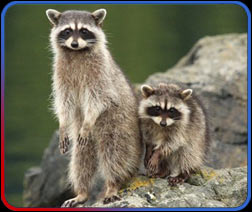 There is a small island in Ucluelet harbour where a few raccoons live. They have no predators on the island so are unafraid. At low tide we may see one or more as they forage for sea food amongst the rocks. During late July to October the young are out as well until they are old enough to leave home and move to the “mainland” (of Vancouver Island). 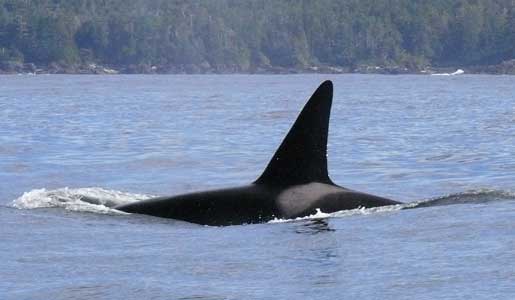 What wildlife do we typically see?

During the spring northern migration of the Gray Whale, that is the species we see. We also see, on occasion, Killer Whales (Orca) and we almost always see Sea Lions, Harbour Seals, Bald Eagles and many sea birds. On the summer “Whale Tours”, if we have time, we will do a little bear watching if we happen to see one. They are quite often seen feeding on the Vancouver Island shoreline. Humpback whales are now our most common whale species in the summer and Sea Otters are making a remarkable comeback so sightings are not so rare.

Wildlife photos taken with a zoom lens and cropped. 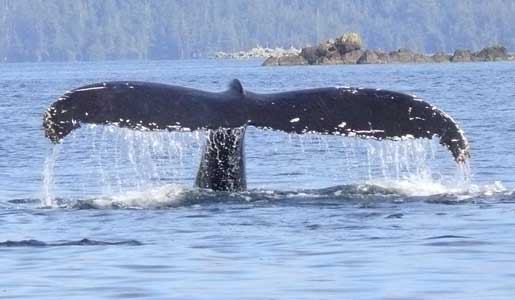 We are dealing with the natural environment which we cannot control, so there is no guarantee. However, most years the sighting percentage for bears on a bear tour and whales on a whale tour is about 95%.

Our extensive experience (over 40 years) nature cruising in Barkley Sound has given us intimate knowledge of the yearly and daily movements of the wildlife; which can change from one year, month, week, day, or hour, to the next. Our boats are in constant communication by two-way radio. Whales and bears though, are only part of the magic of Barkley Sound. The beauty of the coast is stunning and on almost every trip we see Sea Lions, Harbour Seals, Bald Eagles, numerous Sea Birds and quite often a Sea Otter.

During recent summers, our most dependable whales have been further away, which means our faster “Discovery” zodiac style boat has a higher chance of encountering a whale and our slower “Dixie IV” cabin cruiser has a lower chance. We therefore do not offer a summer “Whale Watching” trip on the Dixie IV. Instead, in addition to a Bear Watching tour, we have a general marine mammal nature tour called “Islands and Sea Things”.